Tomorrow there is a trip to Oban, and as I was getting my stuff together tonight I lifted my bulging purse out my bag and had the thought that if there wasn't much money in here what on earth is it the size of a human head for?

So I did the unthinkable. I cleaned out my purse.

I found this incredible treasure trove of things. Mostly receipts. But some hidden gems in there too, some that I had forgotten about.

First off, there are the receipts that I pulled out. There was at least one in every pocket, possibly some vain attempt at a filing system. I think I have every receipt for all the petrol I've ever bought in front of me. That's what it looks like at least! I also have some of those mysterious ones that just have numbers on them arranged in various shapes. No idea where they were from or what they were for. Odd little things. Here is the pile: 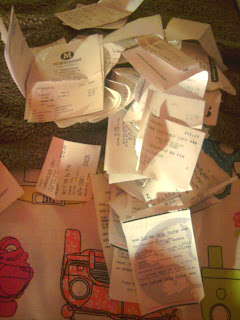 Next up are Calmac related objects. I have no end of ticket book stubs. I'm actually surprised at how many books of ten I've gone through. I also have a rather large stack of these pointless things:

Then I found a weird thing that I only have a vague memory of, and an even more vague, verging on non-existent, memory of why I kept it. It's from a holiday I went on in 2010. That dates how old all this gubbens is, doesn't it?! My friend Becki and I went to Ilfracombe in Devon and I think we had one of our many cream teas here. And then I got handed this, and put it in my purse to carry with me just in case for the next three years. 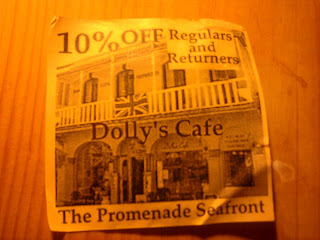 The next two finds are a little precious to me. One is so precious I know I should do something better with it than have it in my purse, but I haven't worked out what to do with it so it lives there still. It marks the day I met Eddi Reader, one of the best singers I've ever heard. That day I met her unexpectedly, she signed this, hugged me and passed on her cold to me. Very generous of her. 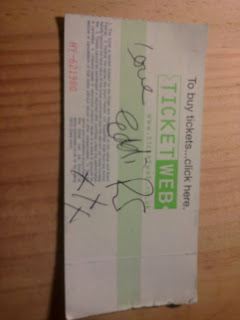 The other thing I have that I'll always have in my purse is and Argentinian 10 australes note. On it, in my own handwriting, it says 'All over the world the gospel is bearing fruit.' I was given it at an event I went to in Edinburgh called Powerpoint. Everyone got different currencies and we were asked to write that on it and to take it home and carry it with us as a reminder of the world as a whole, not just our little corner of it. And I have.


Amongst the rest I came across some Waterstone's gift cards I had forgotten I had (hooray for free books), a very old membership card for Alien Rock climbing wall, three books of stamps, an email address for someone I volunteered with for a week and haven't spoken to since, and a tapestry needle. You know, just in case.

What a difference it has made! My purse looks positively svelte! And it's so light! Before I was in danger of taking the life of small children and animals if I accidentally dropped it.

Now with a lovely feeling of achievement it's time for sleep. *Big contented sigh*
Posted by Sarah Macdonald at 02:31 No comments: 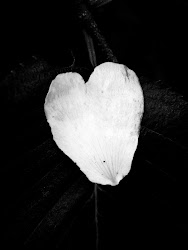